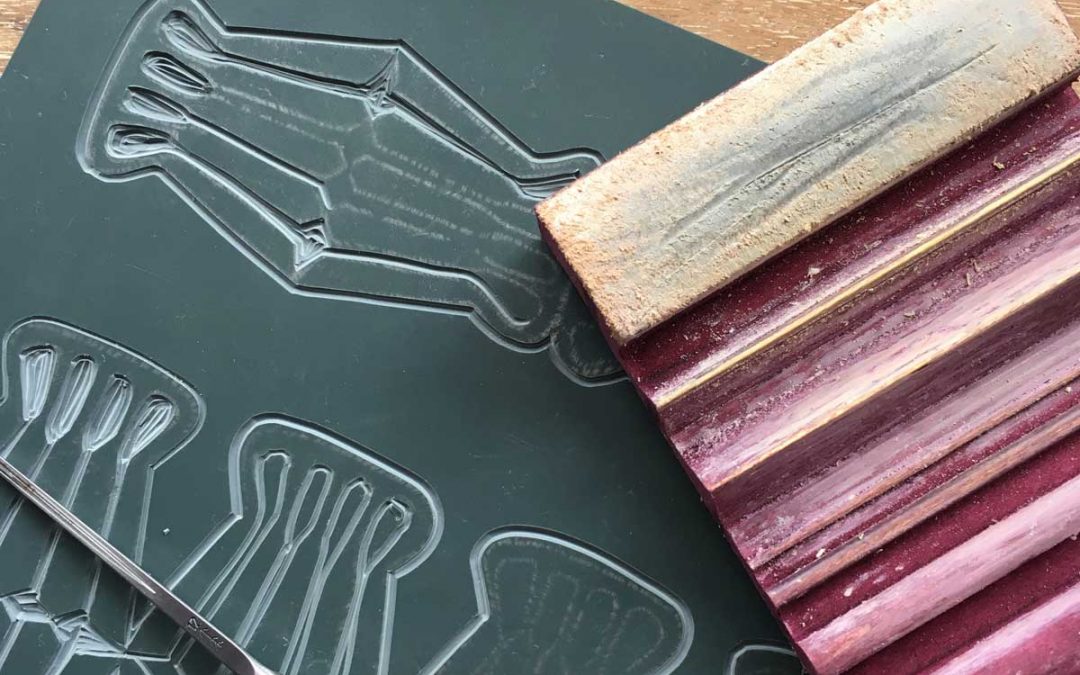 Working on a new pattern at the moment – actually its been in my brain for about a year, its designed with wallpaper in mind. Its called Brackish, meaning slightly salty as in river water. The design is inspired by an antique fishing spear. I have picked out just one element of the spear and put it in this simple repeat. The size of the design is 17.5cm square, so there will be 3 horizontal repeats across one roll of wallpaper. This will be a fun design to print with as I will be able to ink up the two halves of the design in different colours. I couldn’t wait to see what the design looked like on printed paper, so I have made some birthday cards in this design. 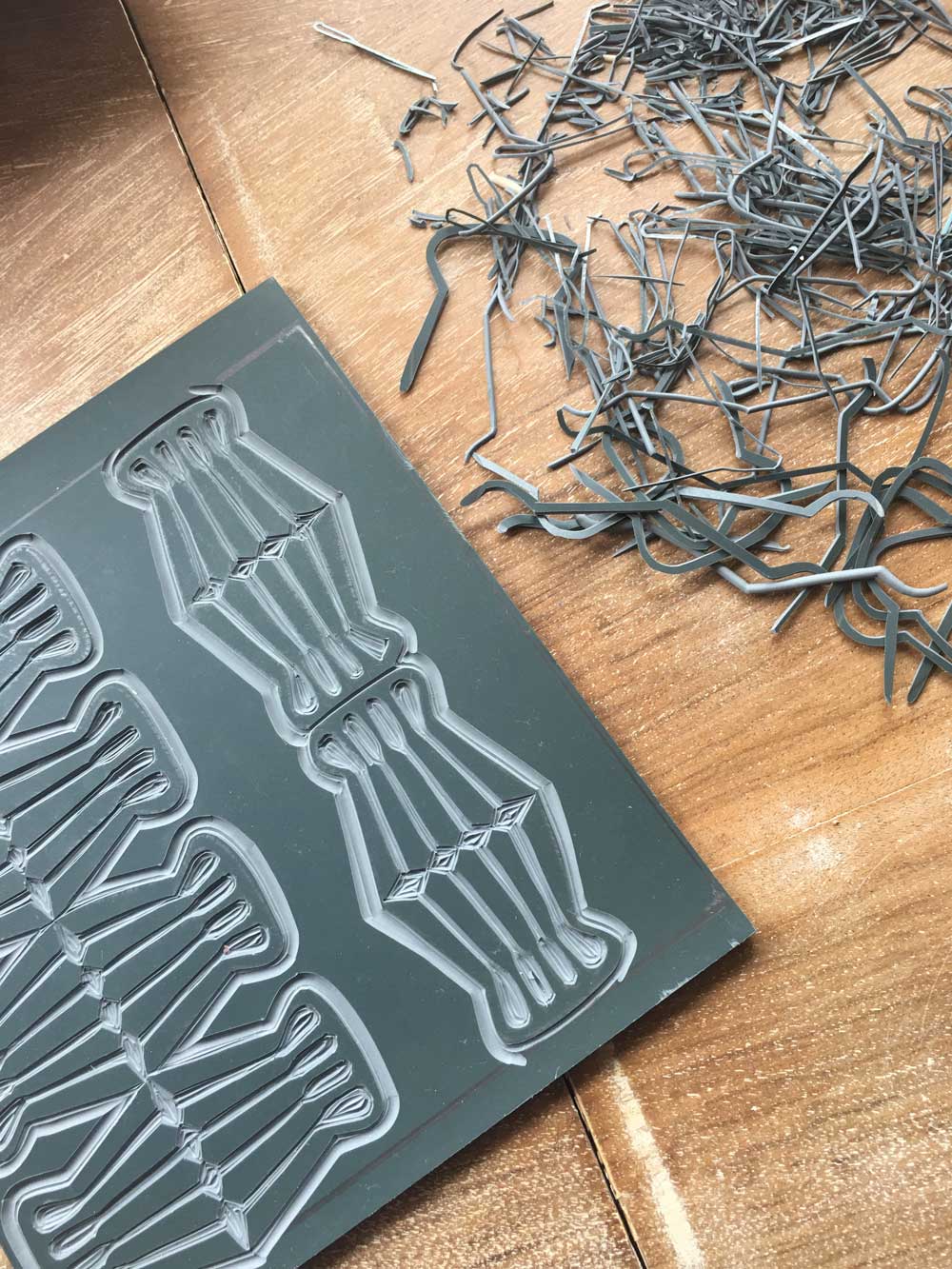 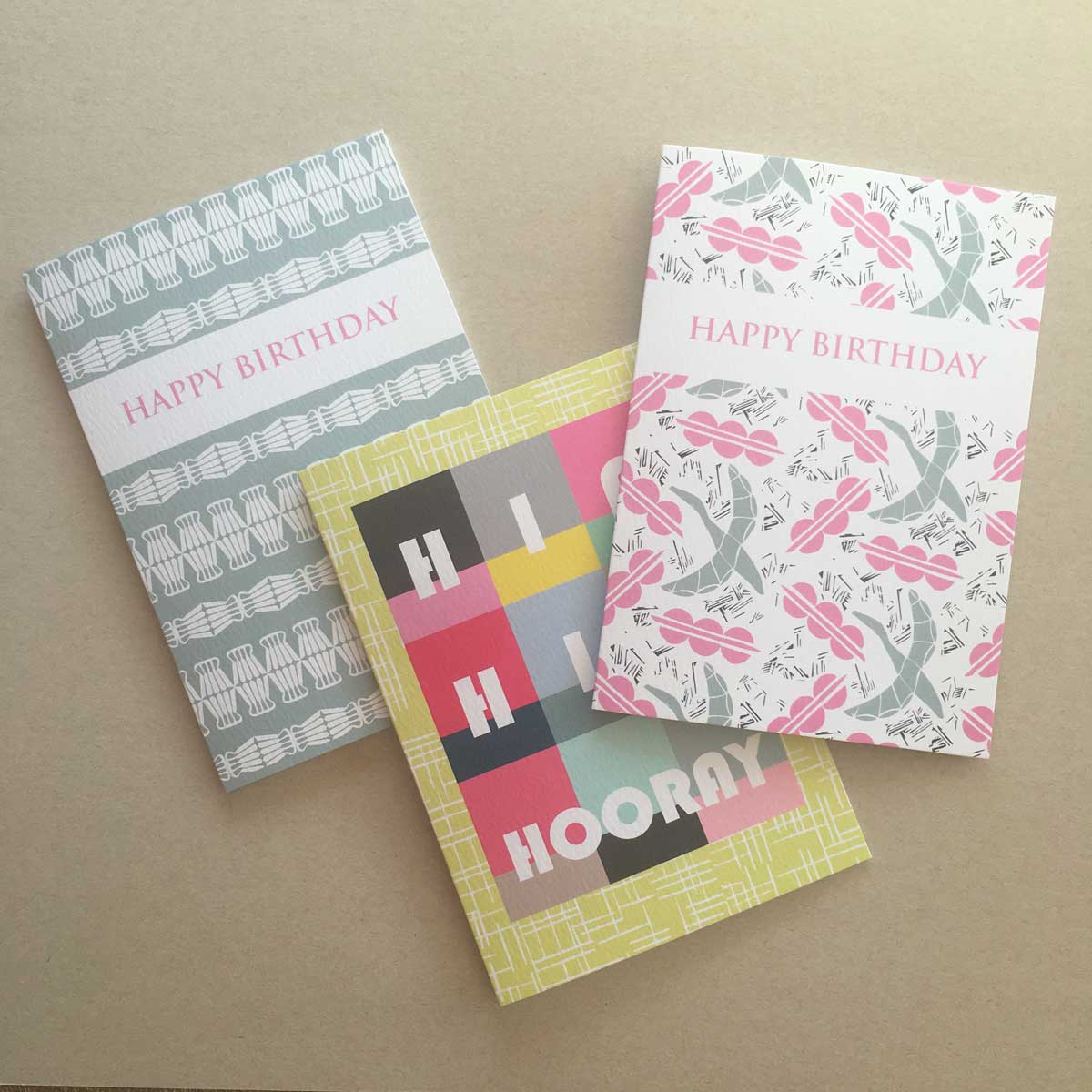 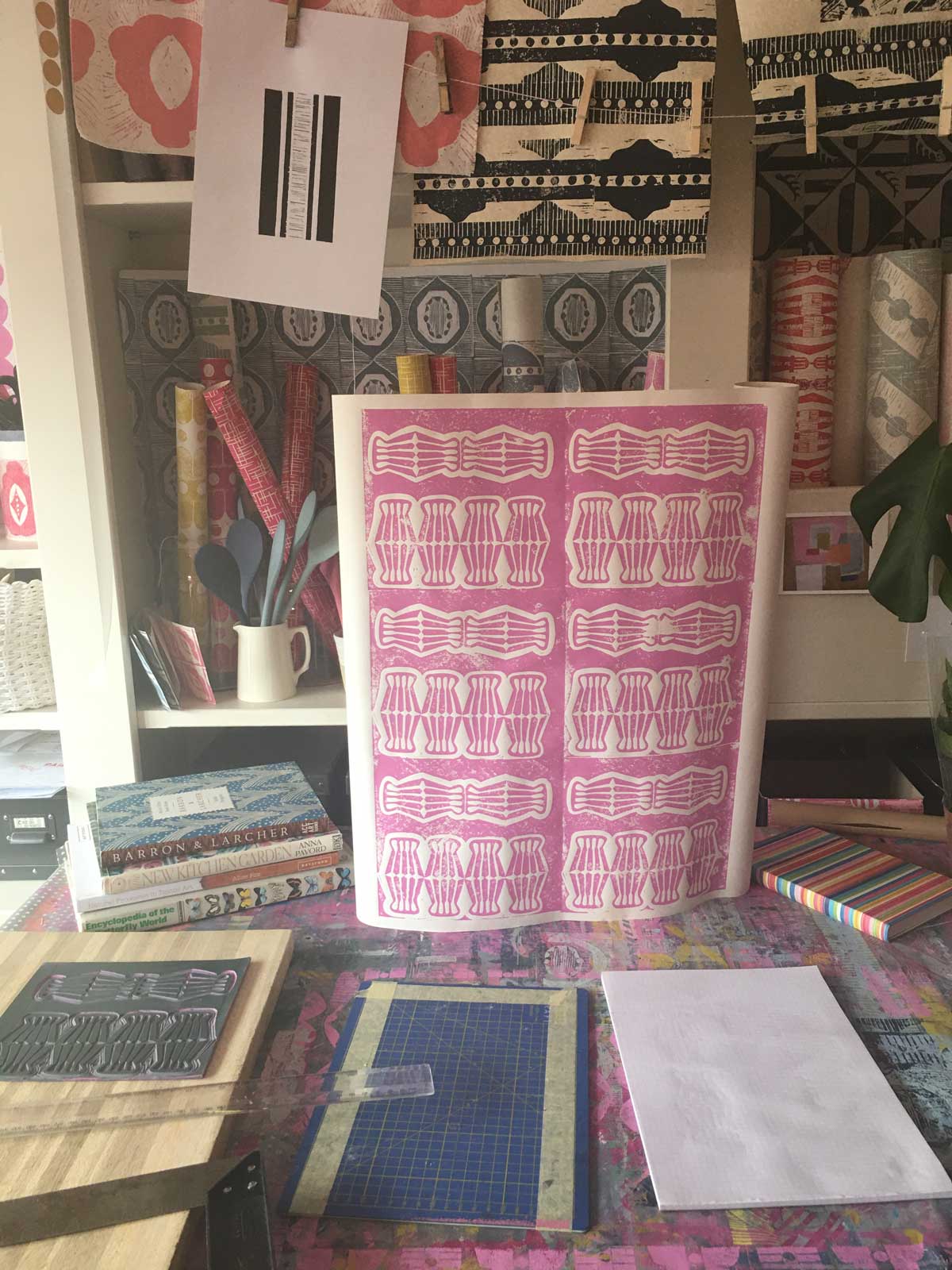 This June I joined lots of local artists for the paint the day competition in Wolverhampton. The Newhampton Arts Centre set a challenge to capture a piece of Wolverhampton in some Art form. You had to work outside, and you had 9 hours to do it.   The plan was to take different elements of the town and bring them together in a pattern for a print. It was such a brilliant day; however I seriously mismanaged my time! I don’t really regret it as I spent such a lovely morning in the sun wandering around the town looking for inspiration.

I revisited the spot where I first met my husband, at the university steps on a blind date 18 years ago.  I went up to Molineux House, where the city archives are, somewhere I’ve never been and found such a pretty garden. The buildings in Wolverhampton are lovely once you start looking and I found too much inspiration! So with just 3 hours left of the challenge I settled in West Park under a tree and started to put together a design,  only the wind had picked up and my bits and bobs were blowing everywhere. So I moved to the back of the park’s tea room pulled together the design and carved the block. With about 40 mins to go I made it back to the centre, set up a makeshift studio in the corner and printed my design.  The final design included the door handle of the Art Gallery, the railings outside Banks’s Brewery and details from the mosaic in the garden of the city Archives at Molineux House. I wanted to include lots more but ran out of time.

A silent auction for all of the artwork ran for a week after the competition and unexpectedly my piece sold! A lovey local event that was a real treat to be part of. 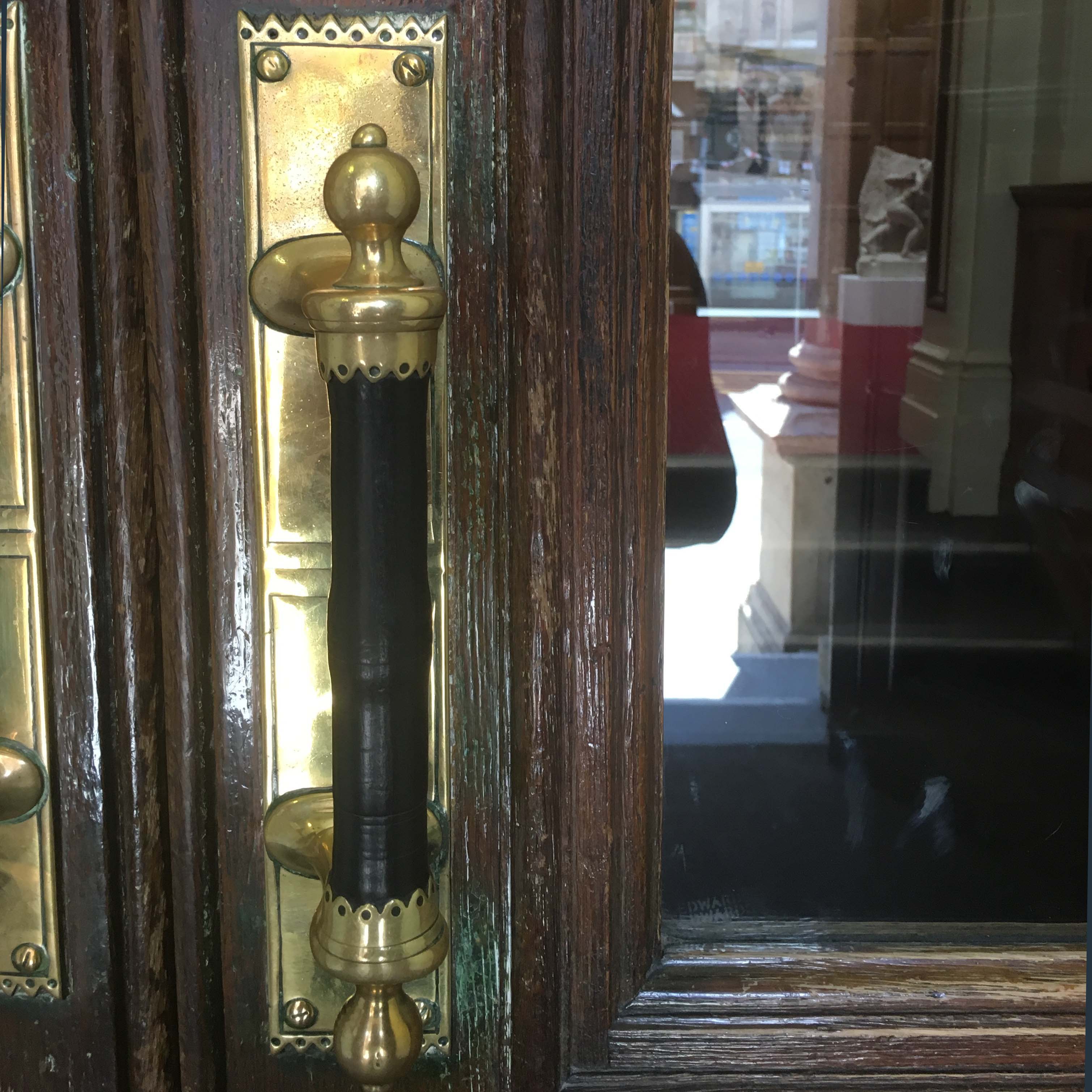 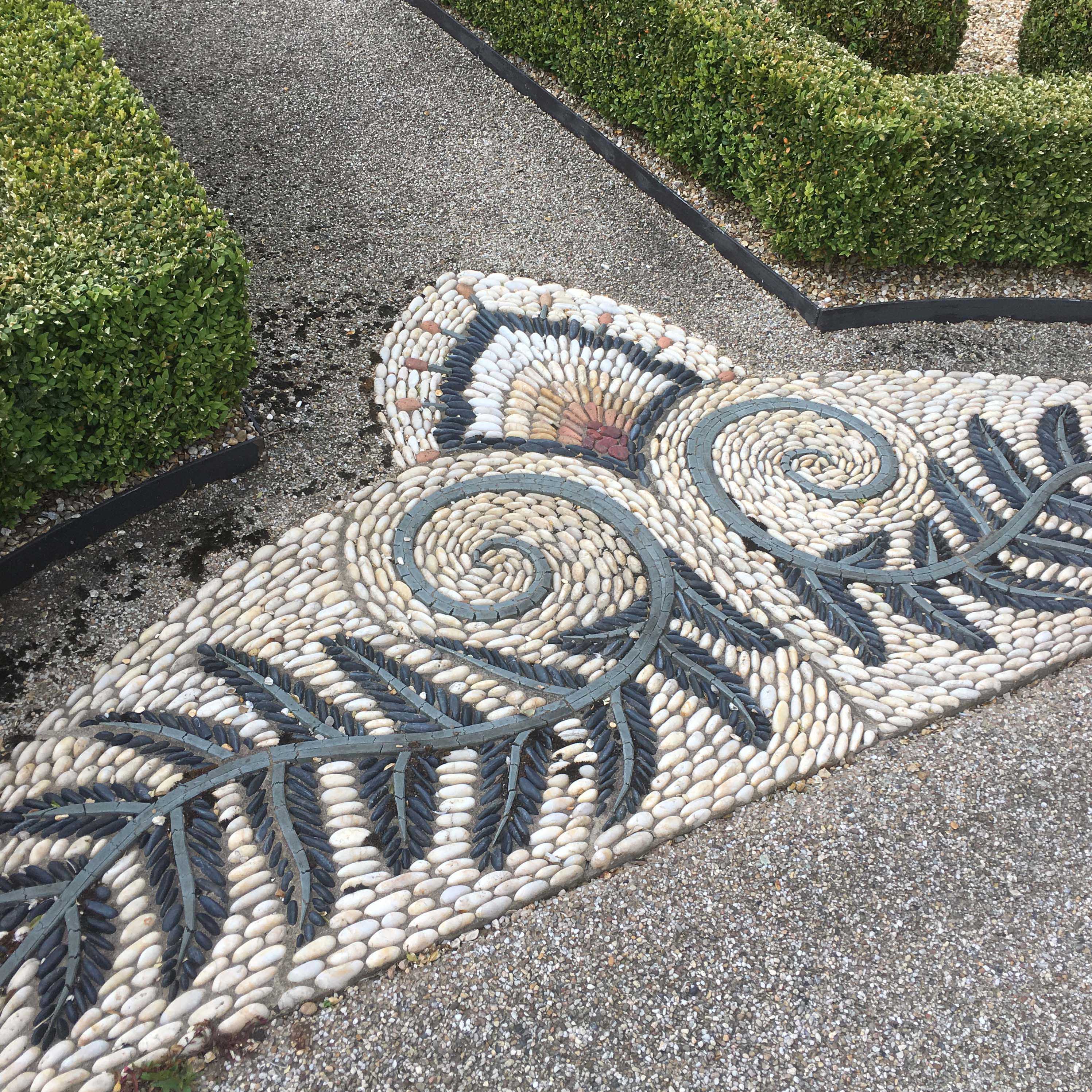 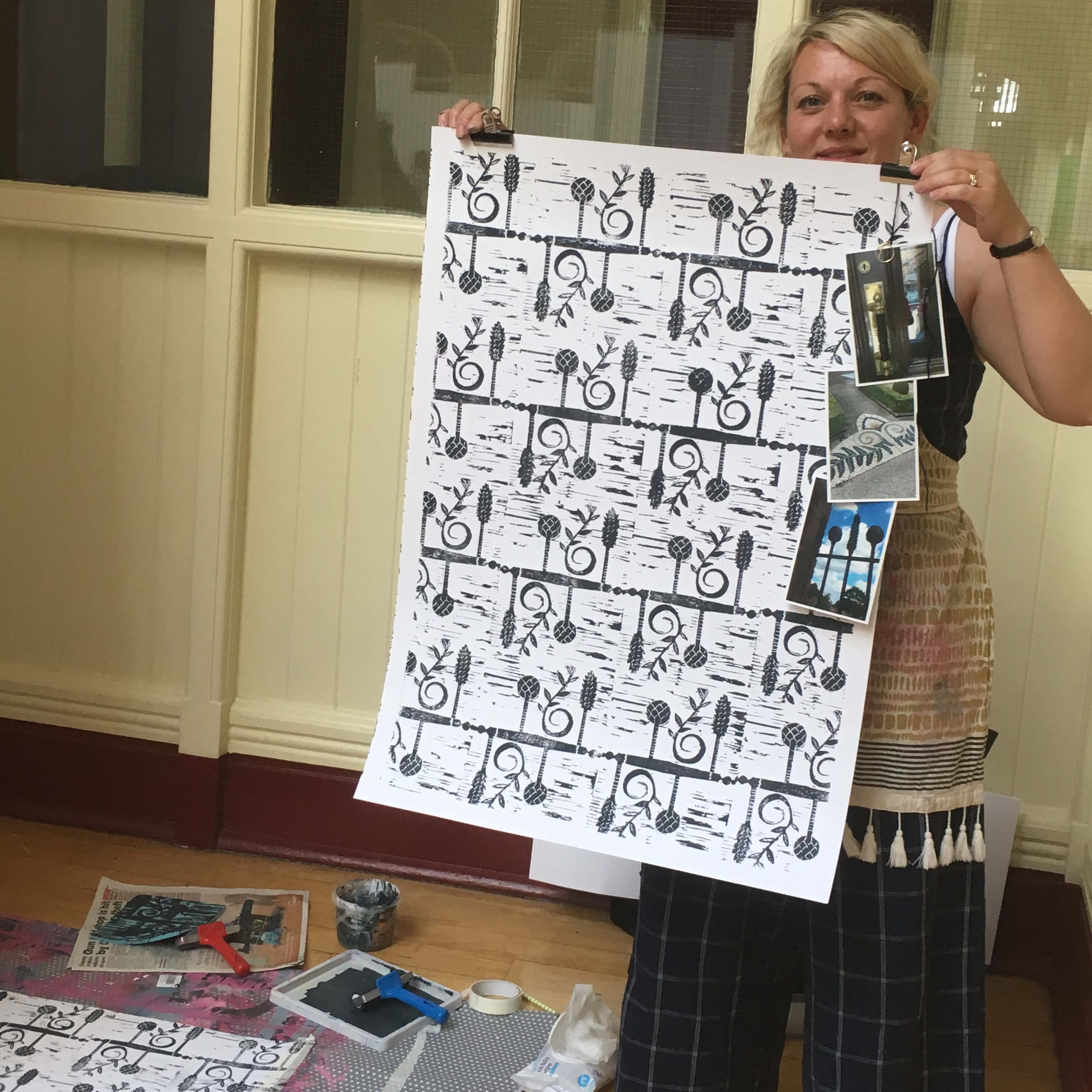 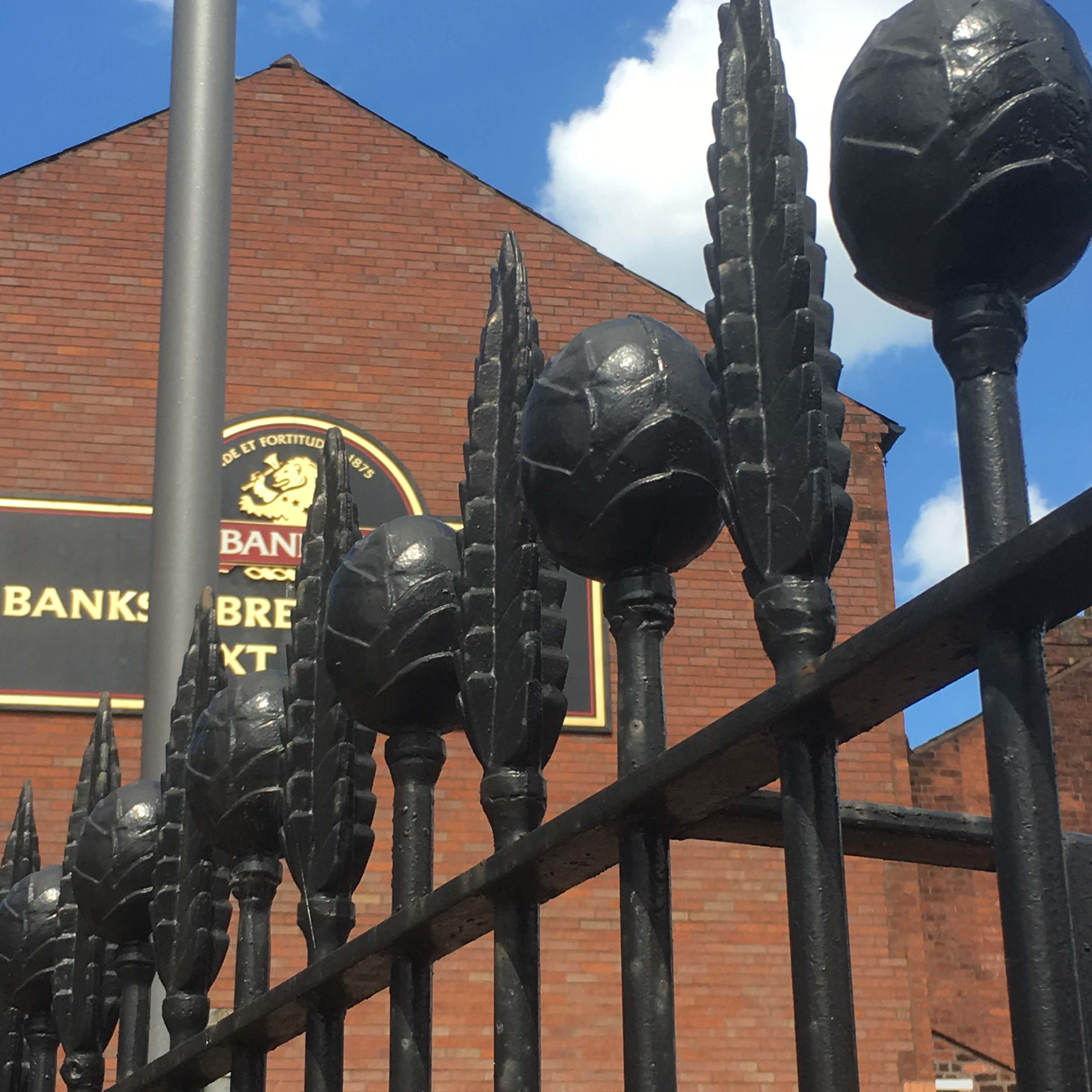 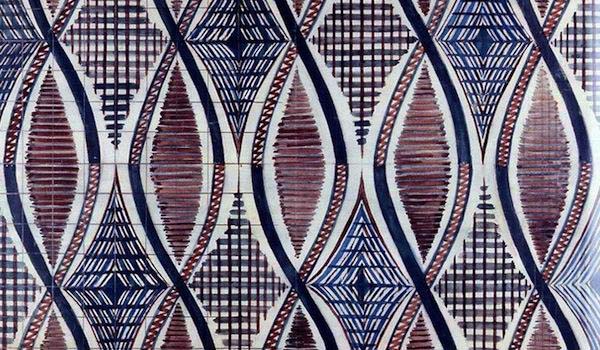 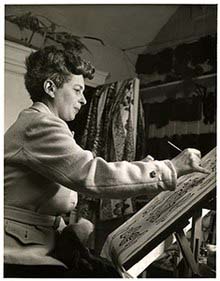 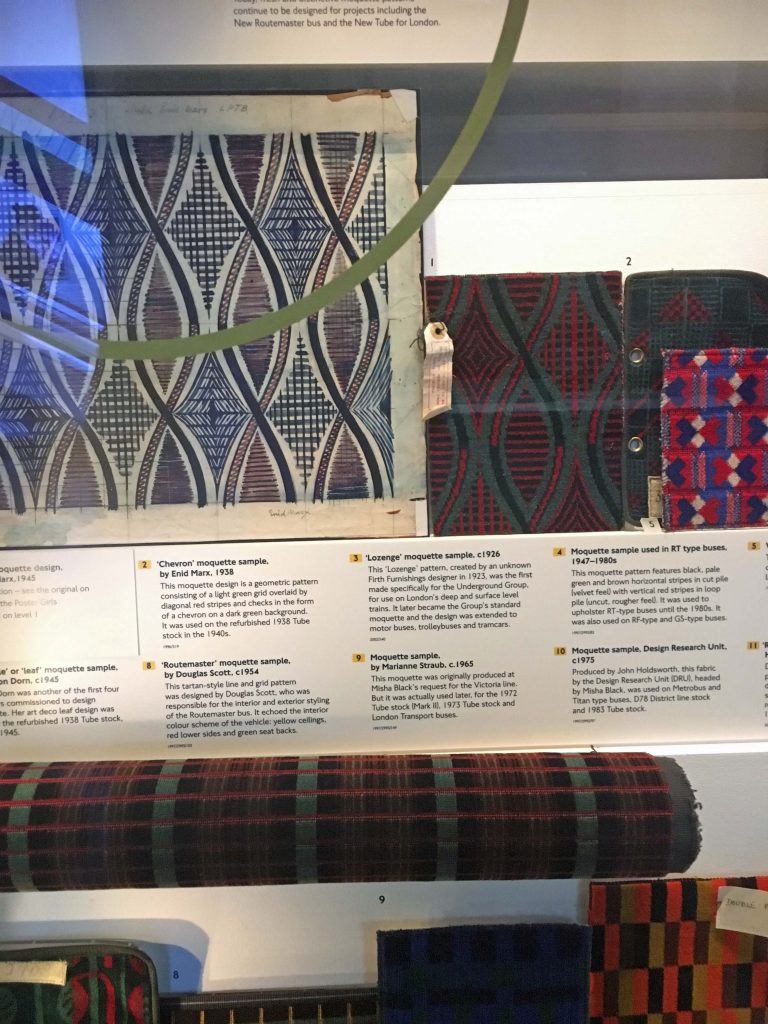 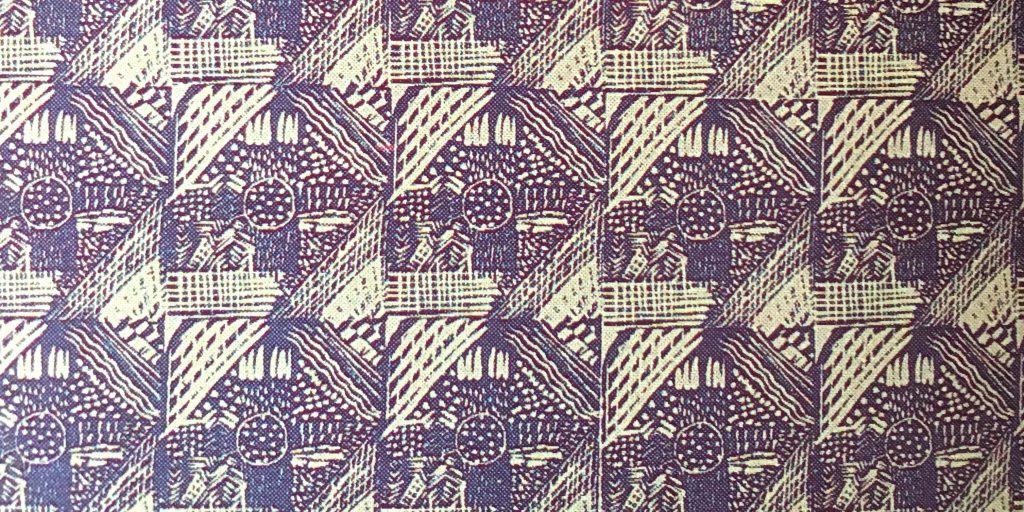 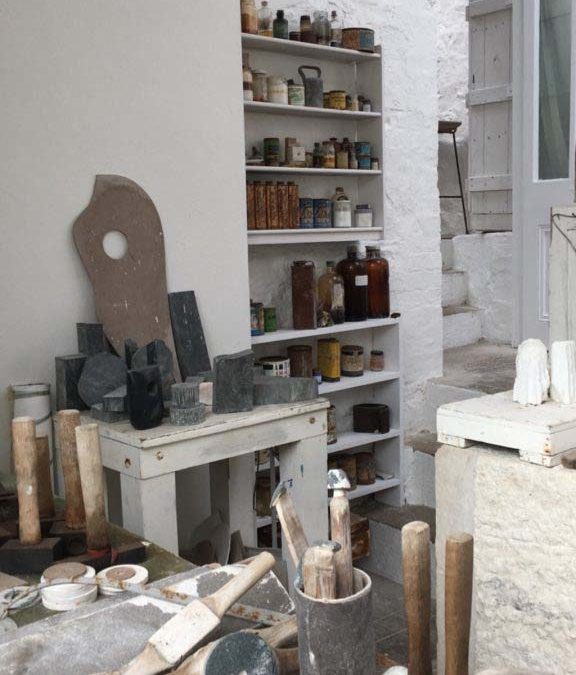 were lucky enough to holiday in St Ives this Easter. The Barbara Hepworth Museum and Garden was just around the corner from where we were staying and  were a real treat. Barbara was born in Wakefield in 1903 and came to settle in St Ives with her second husband and artist Ben Nicholson after the outbreak of the second world war.

Famously in 1931 she pierced a hole in one of her abstract sculptures, the first artist ever to do so.  She once said, “When I first pierced a shape, I thought it was a miracle.” The hole became her signature style and from then on nearly all her abstract work featured a hole. She often painted the inside of the hole or surrounded the hole in a cat’s cradle of strings or wires.

It was in 1949 she bought the Trewyn Studio (now the Museum), she wrote ‘Finding Trewyn Studio was a sort of magic, here was a studio, a yard and garden where I could work in open air and space’.  Her studio and garden are really beautiful. I particularly loved seeing her work studio, the light and the colours in the space alone were so inspiring.

There are lots of her pierced large-scale marble and bronze works in the garden, nestled in amongst beautiful trees and plants. 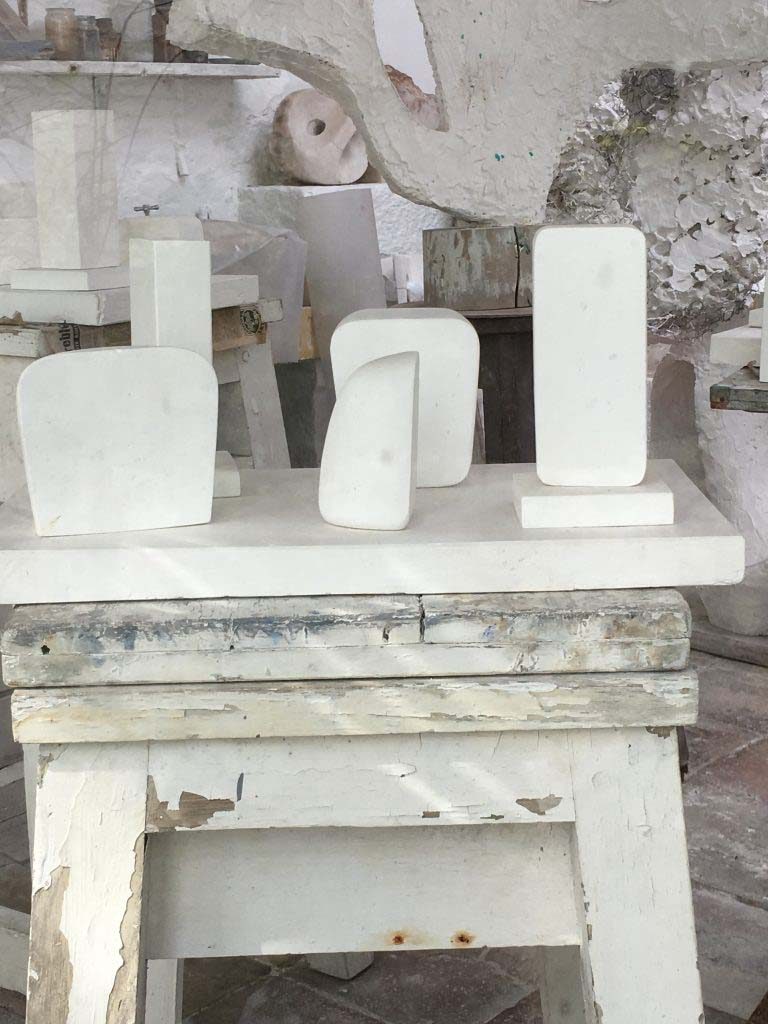 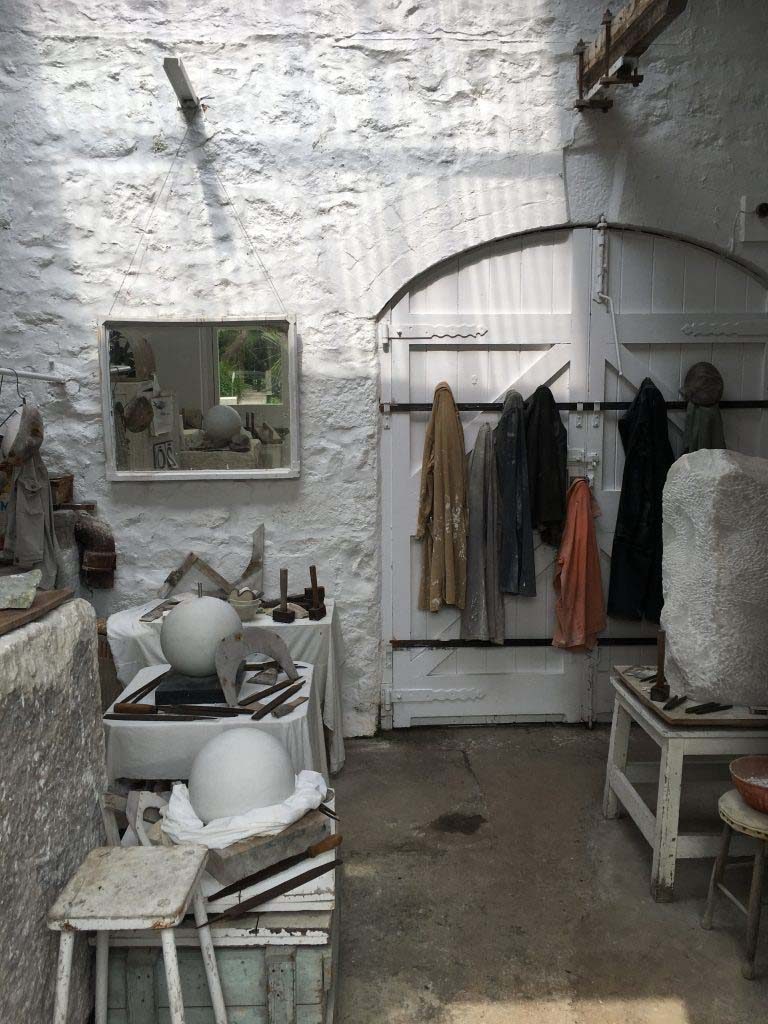 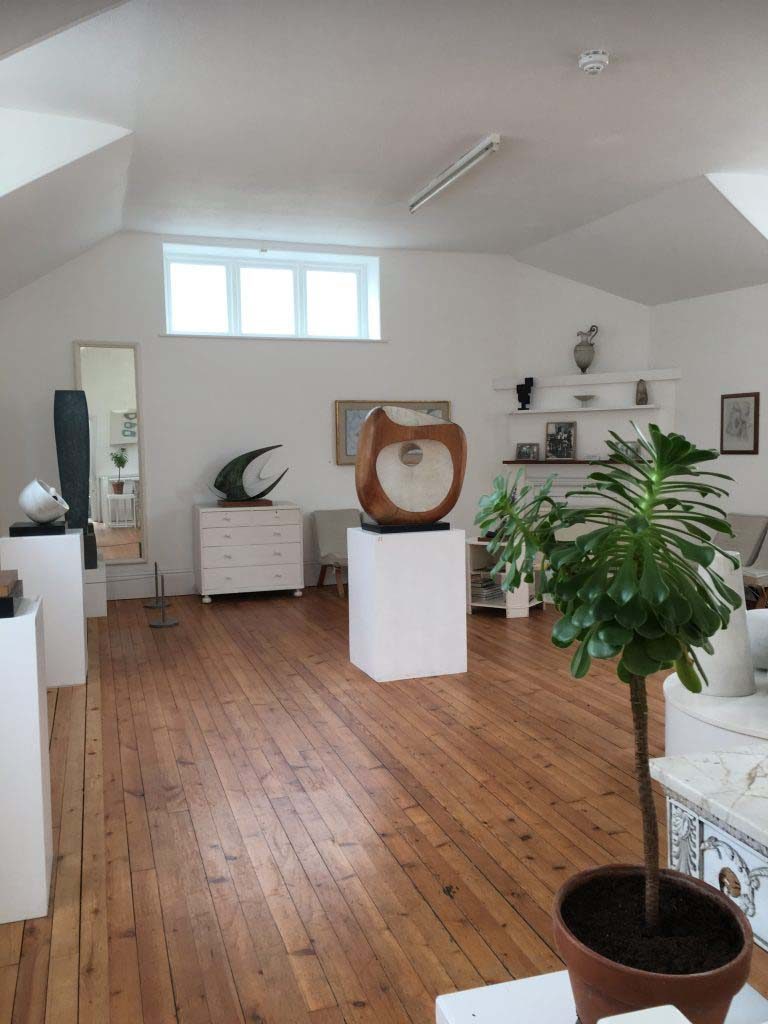 A Life In Pattern, Orla Kiely

A chance to see the Orla Kiely exhibition at the London Textile Museum was too good to miss. I’d never been to the textile museum and I also really wanted to see the portrait of Zandra Rhodes; that was painted by the Sky Arts Portrait Artist of the Year 2018 winner Samira Addo. Sadly, I was too early, and the portrait hadn’t yet made it to the museum when I visited but the Oral Kiely exhibition did not disappoint. The queen of pattern! A master class in colour palette, scale, proportion, balance and pattern repeat at every glance. There was a room with nine or so enormous scaled up coats and dresses, in some of the most iconic designs. Wall after wall of pattern libraries were a real feast to get stuck into. Lots of amazing archival footage of the early days and press cuttings. At the time I had no idea that the fashion side of the Orla Kiley brand was about to go into administration. I did see at a recent furniture show that the designs have now been made into upholstery fabrics, I do hope this iconic brand will stride on. The ladies swimming is one of my favourite Orla Kiely patterns and I couldn’t help but take a photo of the ever so cool museum floor with its sparkles and stars.
Fashion and Textile Museum
Samira Addo 9 Langton Street, London, is where you’ll find the Fabric Collective. They represent the very best hand printed wallpaper and fabric makers. Here you will find the likes of Rapture and Wright, Anna Spiro, Lake August, Penny Morrison and many more artisan designers. What I love about the fabric collective showroom, is that all the fabrics were presented in individual squares. No traditional unwieldy pattern books, making it easy to see the designs, and feel the weight and handle of the fabric. Downstairs, they have a glorious selection of lamp bases and lampshades and at the back of the showroom they have the most beautiful rugs. On the day I visited they were expecting some press photographers and they had a gorgeous selection of Anna Spiro fabrics laid out on their display table. I also remember they were burning a candle by SOH Melbourne, it was the most beautiful candle fragrance I’ve come across in a long time.